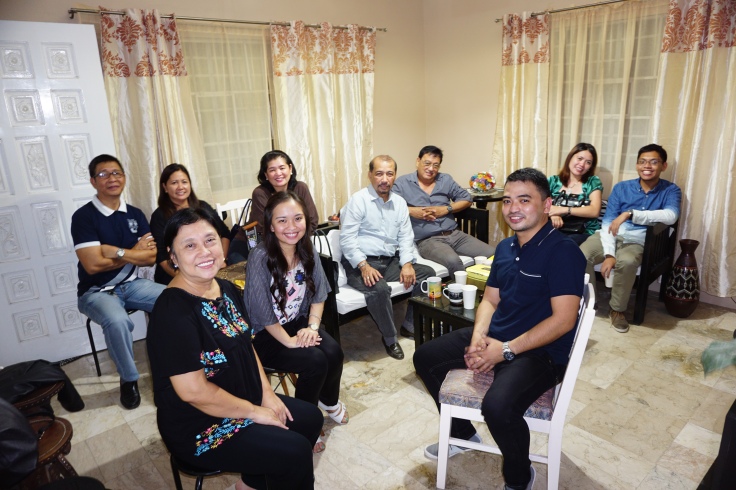 Around this time, exactly two months ago, Melvin and I were in our house, together with our family, close relatives, and close friends, celebrating his proposal and our engagement. During that precious moment, my heart was full of joy and peace.

It was an ordinary Friday – no special occasions – except that classes got cancelled due to bad weather and Melvin was in Tarlac because his new work hadn’t started yet. These situations made it possible for us to go to SM Clark, for a change.

I remember asking him what time he would pick me up that day. After lunch was the answer I expected but no, he said 10:00am. I was a bit surprised because it was early for our usual dates, but I agreed anyway, thinking that he would be leaving for Australia after several days for his training and that day would be an opportunity to spend some quality time. 🙂

So I started preparing and finished around 9:30am. He then informed me that he would arrive later than our agreed time, explaining that he had to wait for his sister and drop her off at the dentist. He picked me up at around 11:00am. (No issues, we don’t usually argue over matters of this kind. 🙂 )

In all fairness, I didn’t have any hint that there was a surprise planned for me. All the time we were in SM Clark I did not notice anything suspicious… not until we were heading back to Tarlac. My sister texted me specific details such as where she was going and that I should go home early because Mommy might get home earlier than all of us (which is a situation we always try to avoid. Hehe). Then just a few minutes after, Mommy texted me that she already got home, and she invited Melvin and I to have dinner at home. Again after a few minutes, Mommy texted me a long message, explaining that she went out for a while to assist a workmate but would be back for dinner and so we still had to come home and just wait for her. While on our way home, my sister kept updating me about her whereabouts and asking me where I was. Because of these, I started to think that something unusual was going on. I began to tell Melvin that my family members’ actions seemed unusual, like my mom who rarely sends long messages because she prefers calling, and my sister who rarely updates me when we’re away. Besides these, I still had many questions and to all of these, Melvin remained silent (which is just normal hehe).

As we were travelling home, something popped into my mind. Could this be the day that he’s going to propose? As we were getting closer to our house, my suspicion was getting stronger. When we finally got home, my hunch got confirmed (but I didn’t tell him). I saw my brother’s room brightly lit (which is unusual), and I saw flowers attached to our kitchen door. Ma-feeling na kung ma-feeling pero, I knew it. Hehe. But still I didn’t tell him that I knew it already.

The car stopped right in front of our gate, just like the way he normally does when he drops me home. Then, he suddenly asked me to get the box of the wrist watch he was wearing from the glove compartment of the car. I found that weird and so I pretended that I didn’t hear what he said. Because I didn’t move, he had no choice but to get it himself. So he got the box, opened it, and I was right! Hehe. Even though I already had an idea, I still didn’t know how to react. I was so happy, so nervous, so excited, all at the same time! He held the ring, and gave his speech (hehe), which I barely heard that moment because of my mixed emotions. But of course, I was able to process everything he said minutes after the magical moment. Hehe. I admire Melvin because of many things, but by far I admire him most for what he said during that night. He was very sincere and honest. I didn’t hear the usual proposal line “Will you marry me?” but I did hear a real proposal. A proposal of what he prays for and hopes to happen to his future and to ours. A proposal of what he is willing to give and do to make his hopes come true. A proposal of the specific plans he desires to make with me, if the Lord wills. His last line was a statement, telling me that the decision was mine to make, whether or not I was willing to accept and agree with his proposal. My answer was not yes. I answered, “syempre!” I went down the car, shivering because of mixed emotions and unbelief that everything was happening for real! As we entered the gate of our house, I was already expecting that something and some people were waiting for us inside. I was right. As I turned on the lights, happy people excitedly greeted and congratulated us! I saw my cousins, siblings, and close church friends. I felt so overjoyed that I got teary-eyed, but then people started coming out of our rooms, one by one. Funny, pero nahiya akong umiyak dahil ang dami palang tao. Hehe. I was so surprised to see his parents, relatives, my relatives, and our church friends who came to celebrate with us. It was an instant engagement dinner!

We enjoyed the fellowship that night and I had fun discovering all their planning and preparations. I really appreciated every little detail revealed to me, just like the story behind the pink lemonade (Melvin and his sister Krisa had gone to different supermarkets in Metro Manila just to find pink lemonade! They found one at SM Megamall, with only two containers left!). I discovered how they had been carefully preparing the past days, mindful that I won’t have any single hint about their plans. They told me how problematic they had become when my work got cancelled that day due to bad weather, because it meant that I would be staying home the whole day. To get rid of me, Melvin scheduled our date as early as 10:00am but picked me up at 11:00am because he had to drop his sisters at our church friend’s house to make some preparations. I had no idea that Ate Ems was all the while waiting for me to leave home so she could prepare lunch for our church friends who would be arriving to start the preparations. While we were at SM Clark, there were people at home busy preparing and excitedly waiting. My heart melted knowing that there were people willing to do those things for me, for us. 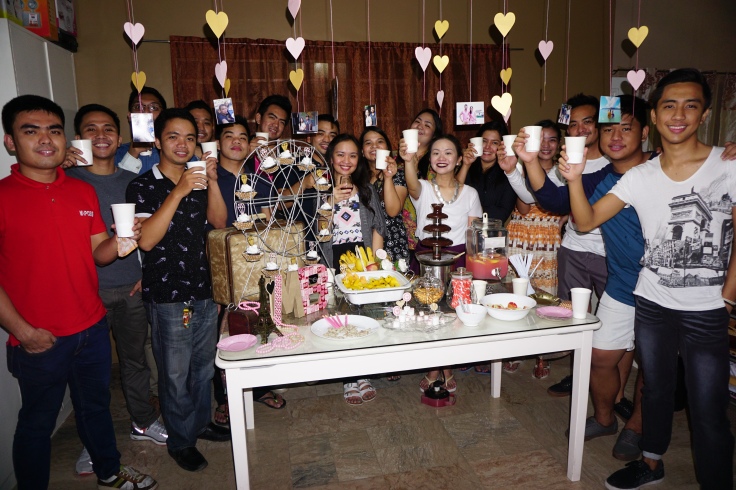